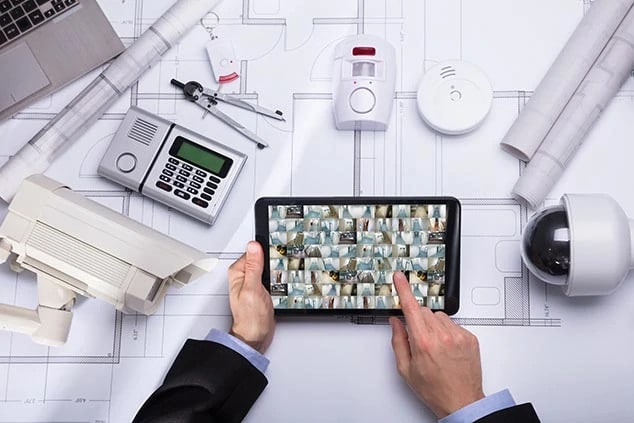 A video surveillance project can be a daunting task, primarily due to the number of factors that determine the best camera to use. Many facilities already have IT infrastructure, which will need to support the cameras you select. The desired image quality and surveillance environment will also determine the camera’s desired performance characteristics. However, the performance of surveillance cameras must be weighed against cost, including the initial cost of the camera and ongoing costs of storing the video. This security camera installation guide is primarily geared for facility managers, security directors and IT professionals who are responsible for designing a commercial video surveillance installation. Making the right choices is particularly important in these cases because of the large number of cameras involved.

The most important issues to consider with legacy architecture deal with existing cameras and cabling. IP cameras are preferred for modern video surveillance, but you may already have analog cameras that you can’t afford to replace. Many older facilities use Category 5 (Cat5) or Cat5e cable for their surveillance systems, but the newer Cat6 cable has better shielding to reduce electromagnetic (EM) interference and should be the go to cable for new installations.

Additional considerations for legacy architecture include the possibility of technicians installing new cable by following established raceways of existing cabling. This strategy can reduce the need to drill through walls made of hard materials such as brick or metal. The installation of cable also requires you to consider the location of the nearest intermediate distribution frame AKA “IDF closet” and the number of camera feeds it can support. Conducting this due diligence before consulting with a security installation company puts you in a better position to accurately compare labor costs and meet other project challenges.  It would also be ideal to develop a cable-path (route) map layout.

A video surveillance system typically should be based on an open platform, meaning that it doesn’t use proprietary hardware or software. This approach helps to lower costs and also allows you to scale your surveillance system more easily. Hardware-based systems generally place a limit on the number of cameras that can be connected to individual hardware such as a digital video recorder (DVR). 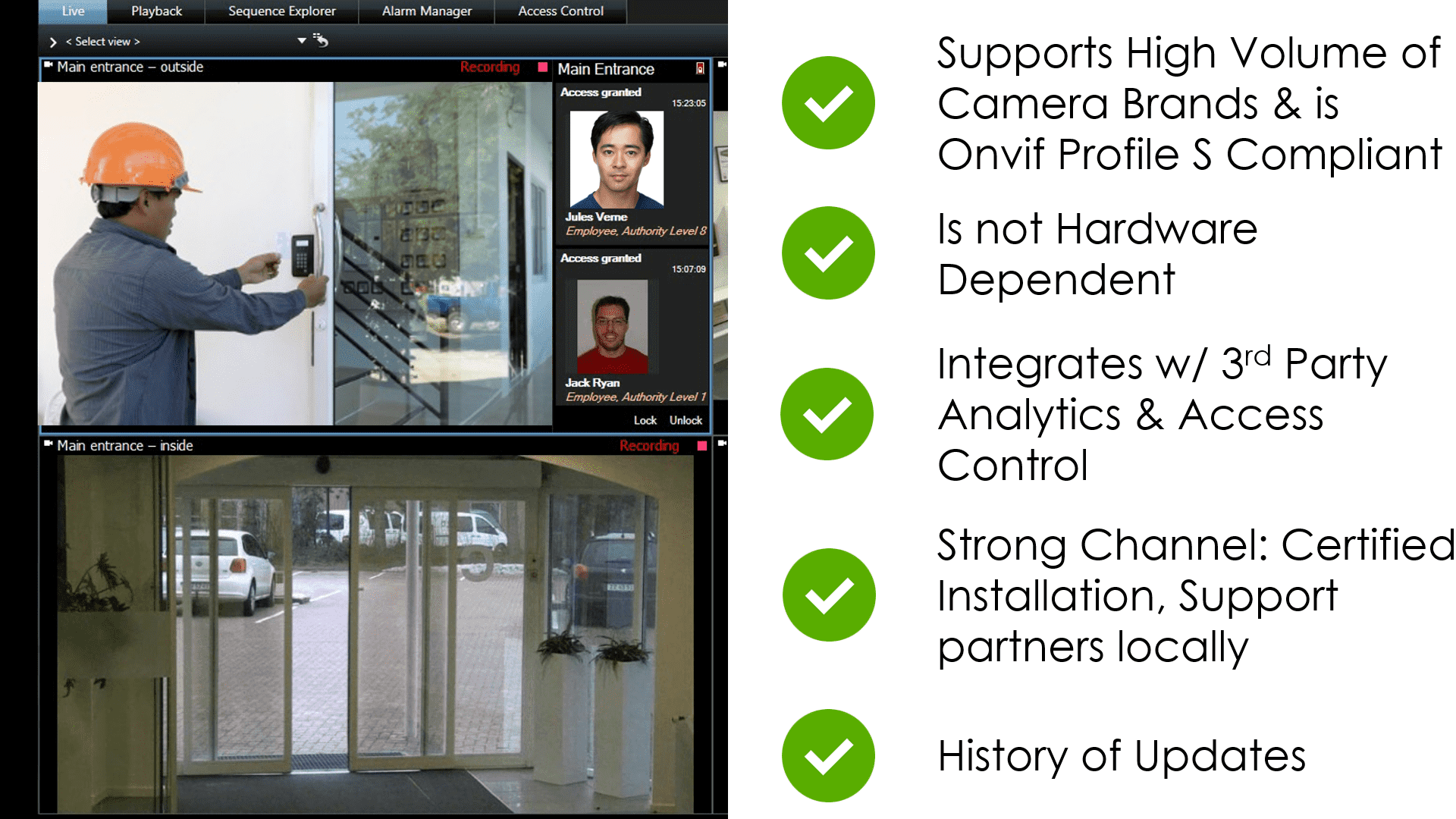 On the other hand, software-based systems use video management software that lets you scale your system one camera at a time. However, these systems will typically require a software license for each camera if they use commercial software. Video management software can also integrate with third-party components such as Intelligent Video Analytics (License Plate Recognition), Mass Notifications or Access Control. Open-platform today means even more than software but the streaming behavior of your individual surveillance cameras.  Open Standards started in the mid 2000’s and began with a trial-by-fire with dozens of different releases on the promise to create an independent standard for video surveillance cameras (Onvif Profile S) and 3rd party video management software systems.  Although it took several years and updates it has finally been realized and branched off into other standards for video analytics, storage, access control and others.  For a business-class, government or enterprise you must confirm the solution you’re purchasing has Onvif Conformance and you can check the software version and camera make/models at www.onvif.org .

Reliability is a core requirement of video surveillance systems since they usually need to operate continually. A system’s reliability is determined by many factors, including the planning, software, installation, and the expected lifetime of individual components and the expertise of the security system integrator. The quality of your uninterruptible power supply (UPS) system and backup procedures also have a profound effect on the reliability of your commercial security camera installation.

Frame rate and pixel density are two of your surveillance cameras’ most important capabilities. Your system integrator will need to consider these factors to ensure your cameras will capture the evidence your application requires and to estimate the storage you’ll need.

You generally want the minimum frame rate needed to do the job, in scenes that have low traffic like lobbies or hallways since a higher frame rate will increase your storage requirements unnecessarily. You may only need to take a picture once every 5 minutes if you’re monitoring physical conditions such as weather or roads.

Take this example: If a person is walking down a side-walk (along-side a building) from one end to the other and it takes them approximately 20 seconds.  Do you need 600 images of that event?

The point is most security professionals would agree you’d rather have one quality forensic image then 600 indistinguishable artifacts.

People standing still or moving slowly may be adequately monitored with no more than five frames per second (fps). Medium speeds for monitoring people are in the range of 6 to 10 fps, and high speeds are between 10 and 20 fps. Applications such as license-plate capturing require much higher frame rates, usually between 30 and 60 fps.

Pixel density is an indication of an image’s resolution and is often measured in pixels per foot (ppf). Like frame rate, you want the minimum pixel density needed to do the job if you’re concerned about storage requirements. 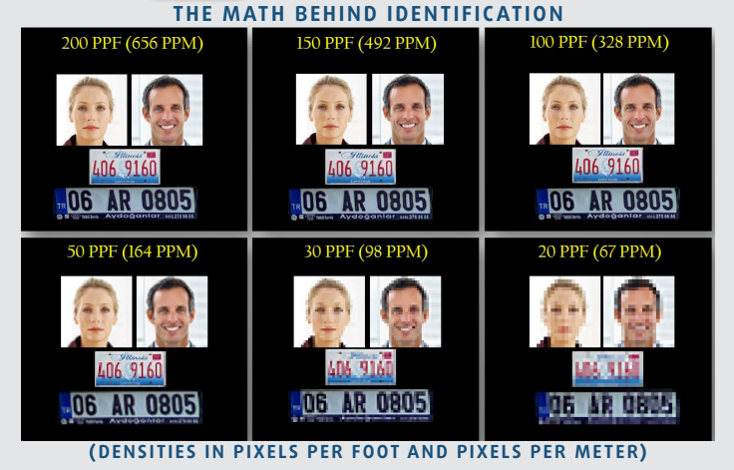 This may sound counter intuitive but “The more pixels does not always equal better image quality” Often times end-users are very disappointed because the result they are experiencing does not match the demonstration they received prior to making their purchase or the camera does perform well during the daytime but completely fails representing blurry or washed-out images at night (when a large volume of crimes can occur).

An image of a person’s face with a pixel density of 20 ppf will provide only general features like gender or maybe ethnicity, but it generally won’t allow you to make a positive identification. A density of 50 should allow a positive identification, although it won’t show all the facial features. License plate recognition typically requires a minimum pixel density of 60 ppf. It’s key to select the right camera for the job identifying your goals before you begin.

Every application has different storage or retention requirements.  Some commercial facilities only need 2 weeks to 30 days of motion based recordings to be archived while others like jail booking local police departments or financial institutions may require 120 days (or even up to a year) of 24/7 constant recordings.

Storage, which primarily depends on factors such as image quality (resolution), frames-per-second, retention period and compression, can be a major cost for a video surveillance system. A video surveillance storage calculator can provide you with a rough estimate of your storage requirements, although a security consultant can provide a more accurate storage analysis by considering factors specific to your installation.

This one-hour video would therefore occupy 2.25 x 108,000 = 243,000 Mb, or about 237 gigabytes (GB) if stored as raw images. Video Compression formats such as H.264 or even H.265 (HEVEC) can substantially reduce the storage requirements for images without the expense of image quality. Nevertheless, you can see the importance of limiting image quality, frame rate and retention to the minimum standard needed to meet your application requirements.

It can sometimes feel like finding a needle in a haystack.

The large number of images that a video surveillance system typically stores means that it also requires a way to intuitively find what you’re looking for when you need it.  Often time’s investigations are time-sensitive and pressure situations and if you’re staring a monitor looking for “the guy with the blue coat” in fast forward for hours it can be easy to miss.

All video management systems have their own interpretation of ‘ease-of-use’ when searching for video search and some are very cumbersome.  When choosing the right video surveillance platform look for ones that deliver a ‘Smart-Search’ function that allows the user to set rules like date, time-parameters (ex. 1pm-3:30pm), camera (or multiple cameras) and even target a specific region-of interest by drawing a box on the area where (example: the suspect walked in, the package was dropped off, the fight happened, the slip and fall took place or the item was stolen).  Setting these parameters can create an intuitive thumbnail of clips that could potentially be the target evidence.  Once the video of interest have been located, an investigator can export them into the desired media format.

There are also more advanced video analytics like rapid forensic search- the process of searching through hours or days of video and time/date/stamping every moving person which drastically reduce investigation time.  Even further advancements in Artificial Intelligence can generally allow you to select a specific area within a scene and track the activity within that area for a particular time period. For example, you could instruct this software to find images of a red Jeep or a woman with a blue shirt and red pants from last Thursday.

Forensic evidence retrieval systems generally allow you to select a specific area within a scene and track the activity within that area for a particular time period. For example, you could instruct this software to find images of a red Jeep or a woman with a blue shirt and red pants from last Thursday. Once the images of interest have been located, an investigator can export them into the desired media format.  Additional video analytic options include facial recognition and identifying baggage that has been left behind.

There are allot of options in today’s video surveillance market.  Manufacturers are bias towards their own brand and some local installers will just plain tell you what you want to hear.  In the area of security design experience matters so please use this guide to do some of the prep-work but also have a conversation or several conversations with a security consulting firms that can put your challenges into context with their experience- this will deliver a solution that yields results not compounding cost.